According to the most recent BLS JOLTS survey data, the estimated number of September job openings nationwide increased by more nearly half a million, with an even sharper rise in Virginia. BLS JOLTS data provides information on all the pieces that go into the net change in the number of jobs. These components include job openings, hires, layoffs, voluntary quits, and other job separations (which includes retirements and worker deaths). Putting those components together reveals the overall change in payroll employment. JOLTS data is seasonally adjusted and describes conditions on the last business day of the month. Current month’s data are preliminary and the prior month’s data have been revised.

The number of September 2022 job openings in Virginia was 357,000, which was a 40,000 increase from August 2022’s revised figure and reflected continued tautness in labor markets seen across the country. Nationwide, the number of September job openings increased to 10.7 million (+437,000), partially offsetting a decline in August. In September, the largest increases in job openings nationwide were in accommodation and food services (+215,000); health care and social assistance (+115,000); and transportation, warehousing, and utilities (+111,000). The number of job openings decreased in wholesale trade (-104,000) and in finance and insurance (-83,000). The Virginia job openings rate (job openings as a percentage of total employment) rose by nearly a percentage point (0.8) to 8.0 and reflected elevated levels often seen in 2022. The U.S. rate changed little at 6.5 percent in September but was 0.8 percentage point lower than its peak in March 2022. In September, the job openings rate decreased in establishments with 5,000 or moreemployees. 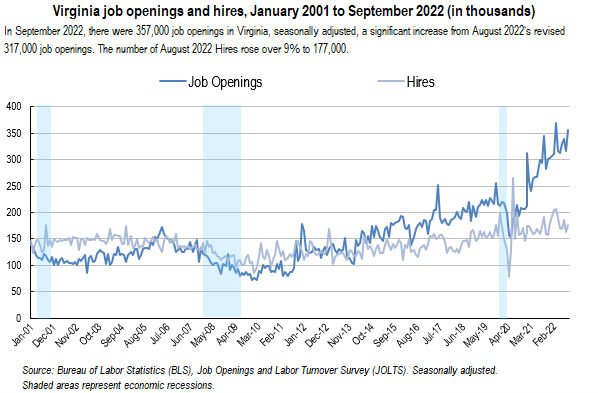 The number of hires in Virginia rose by 15,000 to 177,000 in September, which was 9% higher over the month and nearly a third higher than five years earlier. JOLTS defines hires as all additions to the payroll during the month. The series low of 77,000 was set in April 2020, while the high of 265,000 was set in June of that year. In September, the number of U.S. hires edged down to 6.1 million and the rate changed little at 4.0 percent. Hires decreased in durable goods manufacturing (-57,000) and in state and local government education (-40,000). The number of hires decreased in 8 states, increased in 2 states, and was little changed in 40 states and the District of Columbia in September. The largest decreases in the hires level occurred in California (-91,000), Texas (-57,000), and Ohio (-47,000). The increases occurred in Arizona (+25,000) and New Hampshire (+7,000). In Virginia, the hires rate rose to 4.3% from August’s revised 4.0% rate. The national hires rate was unchanged over the month. In September, hires rates decreased in 9 states, increased in 2 states, and were little changed in 39 states and the District of Columbia. The largest decreases in hires rates occurred in Iowa (-1.1 percentage points), Ohio (-0.9 point), and North Dakota (-0.8 point). The increases occurred in New Hampshire (+1.0 point) and Arizona (+0.8 point). 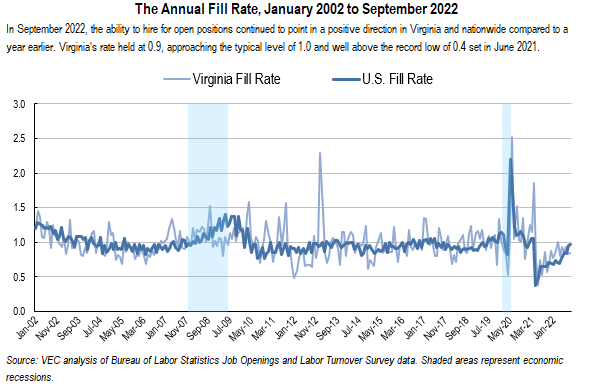 In September 2022, the ‘annual fill’ rate (the ratio of ‘this month’ hires to ’last month’ job openings, over the year) held steady at 0.9. The U.S. annual fill was unchanged at 1.0. This indicates a trend in recent months towards less difficulty in filling positions when compared to a year earlier. The fill rate is a measure used to evaluate how labor markets differ in the pace that job openings are filled. An annual fill rate near or above 1.0 can indicate that employers are growing more efficient at filling job openings. On the other hand, an annual fill rate of less than 1.0 can indicate a tighter labor market, with employers having greater difficulty filling job openings compared to a year earlier. Going back to 2001, the highest annual fill rate occurred during June 2020 because, after the nationwide shutdown due to the COVID-19 pandemic, employers across the country sought to quickly hire for vacated positions. The lowest fill rate in Virginia occurred in June 2021. During that time, there were many factors that hindered the filling of vacant positions by employers, such as health concerns, employee skills, and childcare needs, but the biggest factor was the comparison against the historic re-hiring hike the year before.

The hires-per-job-openings (HPJO) ratio was little-changed at 0.5 in September, lower than the 0.6 rate nationwide. This measure shows the rate of hiring compared to open jobs and is a proxy for time to fill positions. In 2022, the rate has hovered around one hire for every two job openings in Virginia and in the Commonwealth. 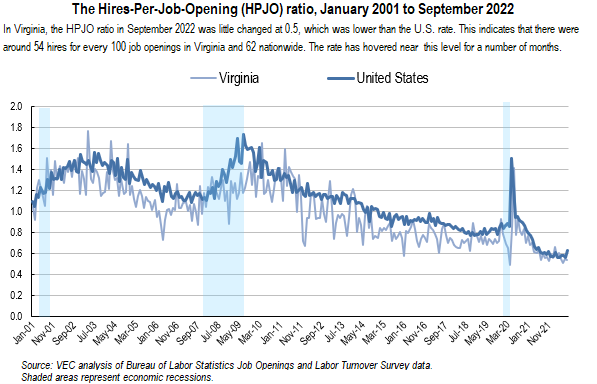 An estimated 109,000 workers quit jobs from Virginia employers in September. The number of quits rose by 6,000 from August revised figure of 109,000 and was up by a quarter compared to five years earlier. The number of quits was down significantly from the record-breaking month of December 2021 when 136,000 Virginia workers quit their jobs. Quits, a component of total separations, are voluntary separations initiated by the employee. In September, the number of U.S. quits changed little at 4.1 million, and the rate was 2.7 percent for the third month in a row. U.S. quits decreased in construction (-56,000); transportation, warehousing, and utilities (-35,000); and durable goods manufacturing (-28,000). Quits increased in state and local government, excluding education (+15,000). The largest decreases in the quits level occurred in Texas    (-111,000) and Florida (-28,000), as well as in Georgia and Pennsylvania (-19,000 each). The increases in the quits level occurred in Illinois (+50,000), Michigan (+21,000), and Kansas (+9,000). The number of quits can be seen as a leading indicator of wage trends in that it includes workers who quit to move to another job. The quits rate in the Commonwealth increased by 0.2 of a percentage point to 2.7% and remained at the elevated levels seen over the last twelve months. The quits rate nationwide was unchanged at 2.7%. In September, U.S. quits rates decreased in 8 states, increased in 3 states, and were little changed in 39 states and the District of Columbia. The quits rate decreased in establishments with 50 to 249 employees.

The September 2022 churn rate (the sum of the hires rate and the total separations rate) rose to 7.9 from August’s revised 7.6 rate in Virginia, indicating continued elevated velocity of movement into and out of jobs but slower than earlier in the year. Nationwide performed similarly, as the U.S. churn rate slowed over the month and signaled deacceleration from early 2022. An elevated churn rate indicates a labor market with a high hires rate, a high separations rate, or both. It can signify that workers are moving more frequently into and out of jobs in the labor market. Conversely, a low churn rate indicates a labor market with a low hires rate, a low separations rate, or both. Labor markets with the most churn may also have more seasonal employment patterns not fully captured by seasonal adjustment factors, which can lead to more frequent job-to-job movement. 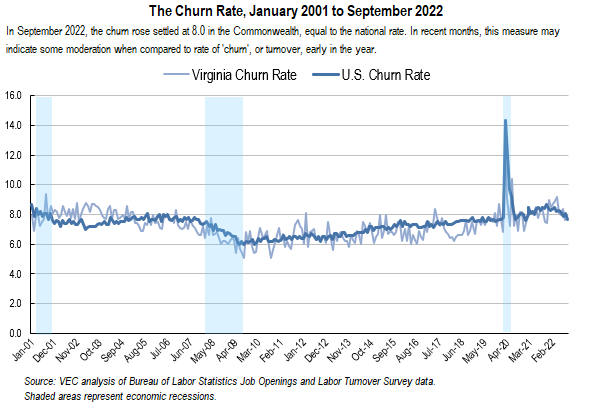 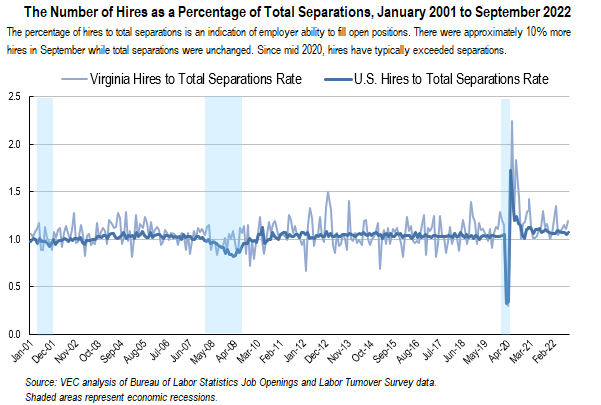 BLS JOLTS figures for September indicate that Virginia’s labor market remained tight as job openings held at historically high levels. The relationship between the number of Virginia unemployed and the number of job openings provided further evidence of a tight labor market as there were over three job openings for every unemployed worker in Virginia in September—matching the record set in July of 2022. The number of hires also increased, climbing by 9% over the month and by nearly a third from five years earlier in the strong pre-Covid economy of 2018. Moreover, September hiring continued to significantly outpace job separations while job quitting made up three quarters of job separations. These indicator trends provide additional evidence of continued confidence among job changers and competitiveness for staff among employers.

The Virginia Employment Commission plans to release the October 2022 analysis of the BLS Job Openings and Labor Turnover Survey for Virginia on Monday, December 19, 2022. The data for all states and the U.S. will be available on the BLS website JOLTS page, at https://www.bls.gov/jlt/. BLS is scheduled to release the October JOLTS data for states on Thursday, December 15, 2022.

Technical note: The Bureau of Labor Statistics (BLS) Job Openings and Labor Turnover Survey (JOLTS) produces monthly data on U.S. and regional job openings, hires, quits, layoffs and discharges, and other separations from a sample of approximately 21,000 establishments. As a supplement, BLS has begun publishing state estimates that provide monthly information that can be used to better understand the dynamic activity of businesses in state economies that leads to aggregate employment changes. For more information on the program’s concepts and methodology, see “Job Openings and Labor Turnover Survey: Handbook of Methods (Washington, DC: U.S. Bureau of Labor Statistics, July 13, 2020), https://www.bls.gov/opub/hom/jlt/home.htm. For more information on BLS’ state JOLTS estimates, see https://www.bls.gov/jlt/jlt_statedata.htm.

Job Openings
Job openings include all positions that are open on the last business day of the reference month. A job is open only if it meets the following three conditions: (1) A specific position exists and there is work available for that position; the position can be full time or part time, and it can be permanent, short term, or seasonal; (2) the job could start within 30 days, whether or not the employer can find a suitable candidate during that time; and (3) the employer is actively recruiting workers from outside the establishment to fill the position. Excluded are positions open only to internal transfers, promotions or demotions, or recalls from layoffs.

Hires
Hires include all additions to the payroll during the entire reference month, including newly hired and rehired employees; full-time and part-time employees; permanent, short-term, and seasonal employees; employees who were recalled to a job at the location following a layoff (formal suspension from pay status) lasting more than 7 days; on-call or intermittent employees who returned to work after having been formally separated; workers who were hired and separated during the month; and transfers from other locations. Excluded are transfers or promotions within the reporting location, employees returning from a strike, and employees of temporary help agencies, employee leasing companies, outside contractors, or consultants.

Separations
Separations include all separations from the payroll during the entire reference month and are reported by type of separation: quits, layoffs and discharges, and other separations. Quits include employees who left voluntarily, except for retirements or transfers to other locations. Layoffs and discharges include involuntary separations initiated by the employer, including layoffs with no intent to rehire; layoffs (formal suspensions from pay status) lasting or expected to last more than 7 days; discharges resulting from mergers, downsizing, or closings; firings or other discharges for cause; terminations of permanent or short-term employees; and terminations of seasonal employees (whether or not they are expected to return the next season). Other separations include retirements, transfers to other locations, separations due to employee disability, and deaths. Excluded are transfers within the same location, employees on strike, and employees of temporary help agencies, employee leasing companies, outside contractors, or consultants.